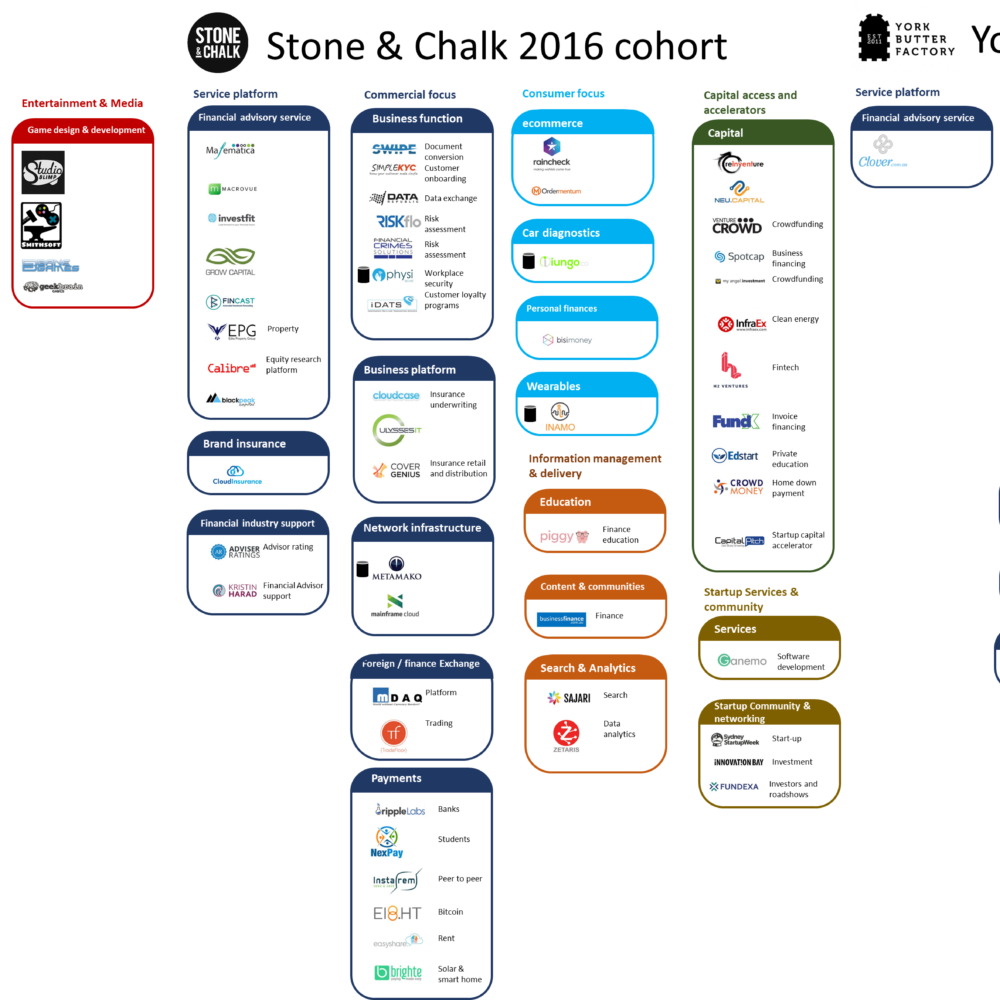 I stumbled across some notes I took in the form of cohort maps from three Australian hubs in 2016. This combined with recent national and state reporting has me consider where we have come from and a few thoughts on what’s next.

It is the end of 2019. The sixth Crossroads report has just been released by startup peak body StartupAus, highlighting the current state of Australian entrepreneur support and recommendations for the future. This is just a week after StartupWA released their report showing growth of Western Australia’s startup ecosystem. There are now thousands of organisations supporting entrepreneurs across the nation who deliver over 500 events each week.

The end of year reporting has prompted a few conversations about changes we have seen in the Australian entrepreneur ecosystem over such as a short period of time. Australian entrepreneur support is now more specialised in technology and/or industry sectors and there are stronger ties with specific global precincts. There are now hubs and programs that focus on medical technology into China, agriculture into Israel, and creative industries into Thailand. There are also specific organisations to support niche aspects of the entrepreneur journey, such as early and late stage, exporting, founder mental health and resilience, female and indigenous entrepreneurs, and technology enablement. Regions are becoming known for their strengths even as programs target specific areas for economic diversification.

Go back to 2016, and it was a much different landscape. The federal Ideas Boom program was still in its early days and state-based programs were in development. Around half of entrepreneur support organisations that are around now did not exist. Major cities had only a few main entrepreneur support organisations. Non-metro regions had emerging entrepreneur support groups and many were in early stages of physical spaces. Coworking was an emerging trend but franchise models such as WeWork seemed far away on the horizon. Accelerators considered themselves as startups alongside the companies they were supporting. Everyone was creating their own programs and their own brand.

It was December 2016 when I received the invitation to manage an innovation hub in Ipswich, Queensland. I had an idea about how such things operated from my exposure to Brisbane-based River City Labs and through supporting programs such as Random Hacks of Kindness and Impact Academy. I had also been involved in developing and investing in startups. But the actual model for running innovation hubs was emerging.

As part of my research to prepare for the role, I pulled cohorts from the websites of best of breed hubs at the time. Questions I had included:

I kept a diary of sorts to capture my thoughts, and recently came across cohort maps I made of three hubs used as reference points: River City Labs in Brisbane, Stone and Chalk in Sydney, and York Butter Factory in Melbourne. It was early days in mapping and the accuracy of the categories could use some work. These may not reflect actual cohorts, but were the companies the hubs displayed on their websites at the time.

This post is more a nostalgic review than a comprehensive “where are they now”. As we plan for a new decade in 2020, it can be helpful to consider how far we have come in a short period of time.

River City Labs was established in 2012 as one of the first coworking spaces in Queensland. The Brisbane entrepreneur support scene was limited at the time. Blue Chilli was just entering the market, UQ’s iLab had been around for a while, QUT had a few accelerators, social enterprise Impact Academy was just getting off the ground, and there were a few hackathons such as Random Hacks of Kindness run out of digital firm Net Engine.

By 2016, there was a regular cycle of events and hackathons in the hub. The first accelerator program was in place through muru-D. The video games development scene was past decline, and there were a few remnants from a games focus and the in-house game accelerator Right Pedal. Training company Zenva was established and remains a strong training content company. Betting app Puntaa was a couple years in and a few years out from shifting to Skrilla. Outbound was still considering the success that would later be Travello. Board reporting platform ProcessPA had recently launched and was a year away from the awards and other accelerators it would eventually experience.

Having since been acquired by the Australian Computer Society, many founders and ecosystem leaders can draw a line of sight to the early clubhouse that Steve Baxter created with River City Labs. People often look to bright, shiny building as a proof point of an innovation ecosystem. What is often overlooked is that the origins of an innovation ecosystem often happen in an upstairs room off the main street with a bunch of mates giving it a go.

Stone and Chalk was only a year old by 2016, but it was one of the first hubs with a focus in Australia, much less the Sydney startup scene. Their financial sector mandate guided their cohort, financial partners, and programs. Nearly all profiled companies had something to do with the financial process, be it providing capital, insurance, risk and governance, savings, or investment. Three years on and the financial focus is not as prominent in the marketing but remains in the supporting partners and companies they talk about.

Co-Founded by KPMG partner Ian Pollari as an outcome of a 2014 Committee of Sydney report, the hub can now be seen to contribute towards Sydney’s position in Startup Genome’s 2019 list of top 15 FinTech regions. The hub is now opening a new location in Adelaide in the State precinct Lot Fourteen with a focus on the space and defence industry.

York Butter Factory was an early entrant in the Melbourne scene, launching in 2011 proposing to be Australia’s largest hub. The 2016 cohort reflects the generalist nature of support and the nature of the Melbourne community, covering media, business systems, consumer goods, property, and more.

Now called YBF Ventures, the hub in 2019 provides programs specialising in sectors including a law tech hub and has expanded to Sydney.

The entrepreneur ecosystem is maturing, and the rate of the evolution is increasing. When River City Labs and York Butter Factory started shortly after 2010, they were one of the few coworking spaces in their cities. By the time Stone and Chalk opened in 2015, hubs were differentiating by specialising and there was an increased focus on direct support for entrepreneurs beyond a desk and wifi. Now in 2019, the models for hubs, programs, and a full suite of entrepreneur support can be established in a matter of months.

Most of the pieces now exist in the ecosystem. There is a steady flow of programs, investment funds, spaces and places, government policies, collaborative bodies, education forums, and research bodies. These can be refined and advanced, and the Crossroads report provides ten proposed policy levers to improve the system overall. The basic building blocks are in place and continue to scale and develop.

The rapid growth of 2016 to 2019 meant that many in the ecosystem were discovering how to do business themselves, much less help others or work with others. Rapid growth, competition, and resistance of new entrants by incumbents slowed the system in some areas but the overall momentum has been inevitable.

The next wave will now come from connection and collaboration. Using the new South Australia Lot Fourteen as an example, hubs become sector-focused precincts of curated like-minded support organisations. Regions mobilise around one or two strengths, not just in Australia but globally.

This requires a collective effort, bringing together government, university, corporations, investment, and entrepreneurs, along with support by service providers, local amenities and lifestyle, and others focused on a common goal. Even here we see the global system responding to support. Queensland, Sydney, and Melbourne have participated in the MIT Regional Entrepreneurship Acceleration Programs designed to bring key stakeholders around the table. Techstars and the Kauffman Foundation have related models, and new approaches to provide collaborative frameworks will continue to emerge to break down social and institutional barriers and speed up the network for local competitiveness and the entrepreneur’s speed to market.

Reflecting on the past is helpful to celebrate success and learn from what has and hasn’t worked. The entrepreneur ecosystem is built on leadership from passionate individuals across all sectors – government, university, corporations, investment, and entrepreneurs – who have all acted with positive intent. As we look to 2020, I am excited about collectively working through the next stage as we build on existing foundations to support emerging entrepreneurs across Australia.