Network analysis of an entrepreneur ecosystem – PhD in progress 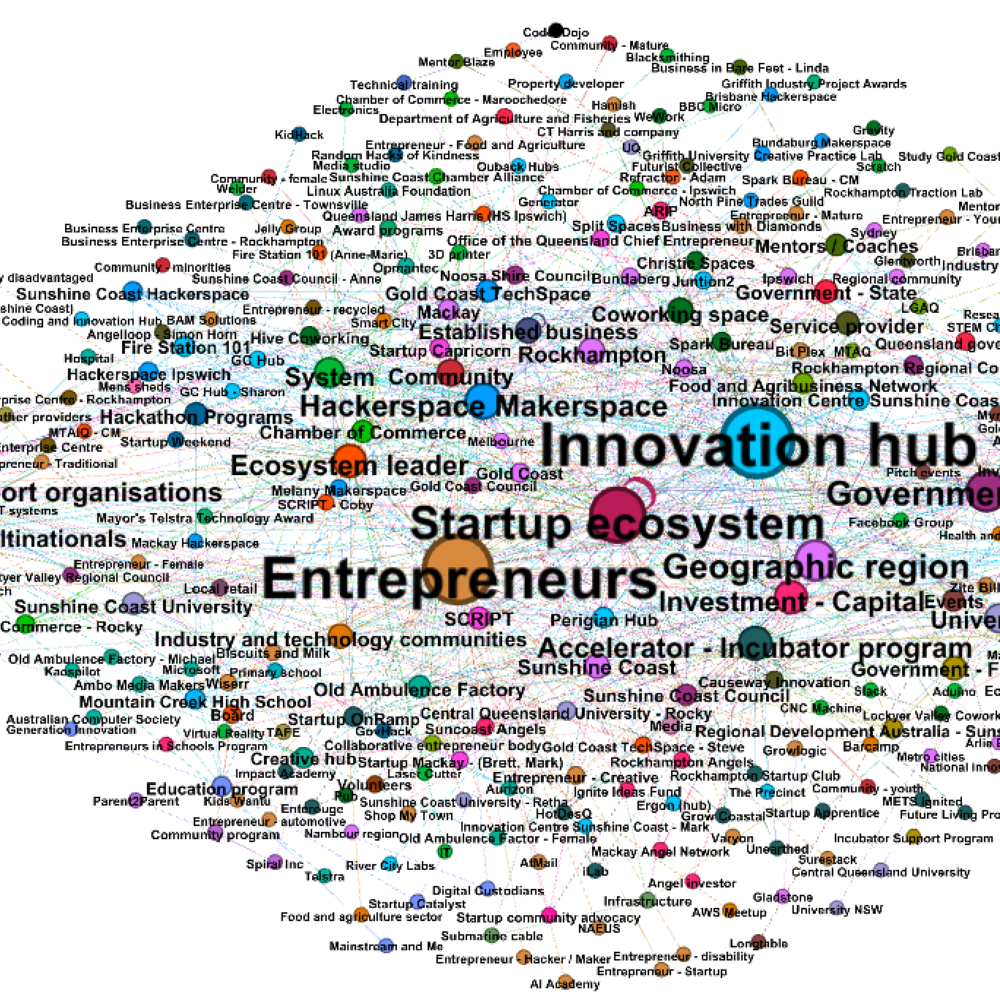 As the data from interviews begins to form interesting pictures, I share insights into the process and perspectives of a personal and collective journey.

An update on the PhD

A PhD begins with a question and some informed guesses on potential answers. You look at that question for a few years until you have pulled it – and at times yourself – apart and examined it from as many perspectives as possible.

Three years ago I asked a question about the role of innovation hubs in regional communities specifically looking at community resilience. For the purpose of the study, innovation hubs are loosely defined as a physical or virtual hub focused on supporting entrepreneurs in a physical region.

The first year was spent living the research, managing an innovation hub in a regional setting. I also traveled overseas to understand whether I was asking the right question. The next year I explored possible answers through the development of measurement models to test in regions. I then hit the road to add the voices of over 180 interviews across Queensland. My original plan for a national tour is still in the works, but pending the completion of the PhD.

The past six months have been a tension between a desire to practically apply lessons from the research, gather more data, and a need to complete the thesis and publish results. Academic pressures and deadlines are resolving this tension as I complete the data analysis and thesis writing.

I have come to a healthy appreciation for what it mean to “process interview data”. My process involved first transcribing interview content using an automated AI service (Temi worked well to get to around 95% accuracy, even with Aussie accents) followed by manual review to clean up of of video and audio content using Nvivo to manage files.

Each transcription is then “coded”. Coding involves looking at each comment in each interview:

The end goal will paint a picture of how types of actors view other types of actors and a collective vision and strategy for the ecosystem. This picture is formed with theories that define a view of the world. Continuing the art metaphor, it is like ensuring there is a solid canvas on which to paint.

The three theories used to define the canvas are:

Over 180 interviews were conducted, and over 150 have been transcribed. Interviews were selected based on a sample of roles as well as opportunities and introductions while I was in a region. The quantity may seem like a high number until it is divided into the number of roles across different regions and then multiple positions in a given organisation. The aim is to get a diverse range of perspectives and see how those differ by role and region.

There are currently identified 55 roles filled by 322 actors. The actor defines their role by describing how they see themselves working with others towards supporting entrepreneurs. These are fluid and an actor can fulfill multiple roles, but a primary role is defined.

Interviews are captured against thirteen regions. Region boundaries can vary. For example, some actors identify with “Far North Queensland” while others with Cairnes or Atherton. There is always a sense of place that becomes an actor in itself interacting with other actors. The culture, history, and sense of belonging play an important role.

Over 1,300 individual codes or observations have been pulled from the interviews so far. These will be grouped in the coming weeks to further develop themes. Each participant was asked about what is working well and challenges in general terms. Below is an overview of instances of benefits and barriers against each actor. The question structure leaned towards positive. Asking about the best possible future also identifies areas that can be improved. Barriers were simply areas that could be improved rather than being positioned as a negative.

The resulting network map produced using Gephi highlights the complexity of support for entrepreneurs. There is high interconnectivity and key actors span multiple regions. An entrepreneur getting into dense areas of the system can accelerate progress. Part of the work and the focus on regional areas is to identify how social and digital systems might address challenges resulting from low density inherent to geographic distance from metro areas.

The size of the node is based on number of observations. Even without detailed content analysis and acknowledging the bias from the focus of the interview, we can make some observations from where people took the conversations.

This work has taken me longer than I anticipated (but as long as others warned me about). However, my excitement about outcomes increases each week. What is emerging is a framework that we can view from multiple perspectives:

Perspectives on these questions are emerging from the data. I look forward to releasing more in coming weeks as we move towards completion.

Feedback and conversation is always welcome. Thank you for joining me on the journey.